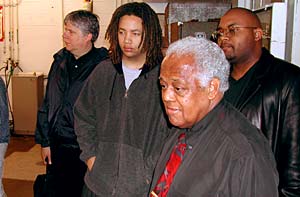 On May 4-6, 2003, a residency with jazz trombone great Slide Hampton took place at the University of Wisconsin-Whitewater. Sponsored in part by a grant from the UW-Whitewater Administration and Edwards Instruments, the workshop was held in honor of Slide’s contribution as a trombonist, composer/arranger, and mentor. As part of the event, five talented university jazz trombonists: Chris Dempsey and Chris Gagne from the Berklee School of Music, Clarence Hines and Mike Williams from The Eastman School of Music, and David Winslow from The University of North Texas were chosen from around the country to work with Slide and to perform in the final concert. Two of the invited participants were winners of the Eastern Trombone Workshop National Jazz Trombone Competition [David Winslow in 2001 and Chris Dempsey in 2003].

After arrivals and rehearsals on Sunday, the residency began in earnest with a trip to the Edwards Instruments facilities in Elkhorn, Wisconsin on Monday. Slide, the five students, bass trombonist Josh Brown, and workshop director Steve Wiest were given the full-treatment tour of the factory by director of product development, Christan Griego. As the entourage was guided through the production portion of the tour, a particularly poignant moment occurred as Slide Hampton encountered a large production room full of trombone slides! [“Slide meets slides”, etc.] At the end of the visit, everyone enjoyed an impromptu clinic as Slide tried out a number of trombone combinations by burning through some particularly demanding bebop heads. 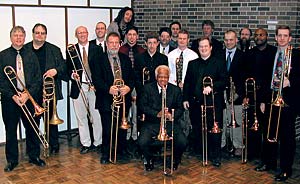 After the master classes, Slide gave a mini-concert for the participants, the audience in attendance and other trombonists who were arriving for the final concert. Slide knocked everyone out with a beautiful rendition of Jobim’s classic “Quiet Nights of Quiet Stars”. Nowhere was Slide’s complete mastery of melodic improvisation utilizing the entire range of bebop vocabulary more evident than on this performance. His giant dark sound, tasty use of the microphone in contrast with sections of full-blast acoustic trombone textures and stunning control of the melodic upper register reminded everyone why he is considered one of the greatest jazz trombonists of all time. 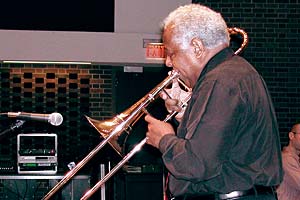 Following a brief break, a 15-piece trombone ensemble was assembled to rehearse some of Slide’s music for the final concert. The group was made up of the five invited students, Steve Wiest, Josh Brown, of some of the top players in the area including Joel Adams, Mike Allsen, Don Deal, Christan Griego, Rob Hyatt, Thomas Matta, Jack Plovanich, and Barry Oosterwaal. Slide ran the rehearsal in consummate professional fashion, finishing in less than one hour! After a wonderful dinner for the invited participants and Slide, the evening concert began. The first half of the show featured the university students performing their master class pieces. After a brief intermission, the large trombone ensemble performed some of Slide’s “World of The Trombone” works. The first arrangement, “Cherokee” featured Slide and Wiest on an up-tempo chart full of stop-time and exciting backgrounds. This was then followed by a fantastic treatment of J.J. Johnson’s “Lament” giving a number of trombonists in the ensemble a chance to play some lead. After another performance by Slide and rhythm section of “Quiet Nights”, Mr. Hampton surprised everyone by adding the Victor Feldman/Miles Davis classic “Seven Steps to Heaven” at an unbelievably fast tempo. This proved to be no problem as Slide negotiated the light speed aspect with typical melodic integrity! The evening finished up with Slide’s most recent reworking of Lester Young’s “Lester Leaps In” from Mr. Hampton’s “Spirit of The Horn” CD. Virtually everyone got a chance to blow on this one and the audience responded warmly, giving Slide a lengthy and well-deserved ovation.

On Tuesday, the residency ended with numerous instances of Mr. Hampton sharing his vast knowledge with participants. At one point, Wiest and the five university students gathered around Slide seated at a grand piano for a spontaneous discussion of his composition and arranging techniques. The day ended with a warm and insightful panel discussion titled “Diversity Issues in the Arts” that featured Slide, and Thomas White [Wisconsin President of the NAACP]. Moderated by Steve Wiest, this discussion was a marvelous way to end this inspirational event!