Phil Wilson maintains a performing/artistic schedule we all dream about. From teaching at Berklee to performing with his Rainbow band Phil offers music that is appreciated by all. His newest CD is no exception as you can see from the review below. We are proud to have Phil play Edwards and it has been great working with him over the years. Thanks for all the music, Phil.

Bossa nova music has a cool, light feeling, with delicate melodies drifting on gentle rhythms. It floated out of Brazil in the 1960s, spearheaded by Joao Gilberto, Vinicius de Moreas and, of course, Antonio Carlos Jobim. The music was popularized in the United States in the 1960s via albums that teamed Jobim with saxophonist Stan Getz and guitarist Charlie Byrd.

Phil Wilson’s Pan American All Stars Celebrate the Music of Antonio Carlos “Tom” Jobim – which may compete for the longest CD title of the year – brings us traditional bossa nova with something of a twist: Wilson’s trombone. 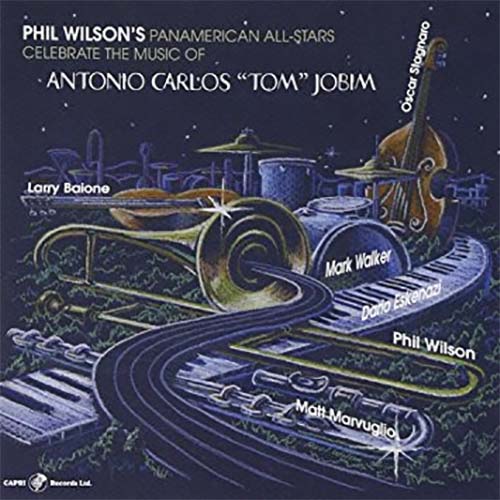 The Brazilian sound normally makes you think of lilting guitars and airy flutes, and simple, insistent rhythms. That’s in evidence here, with the big brass trombone beefing the sound up and enhancing the beauty. Joining Wilson in the front line – and adding a rich, cool beauty to the harmonies  – is Matt Marvuglio on bass flute, the C flute’s more robust-sounding brother.

Wilson has taught at Boston’s Berklee College of Music since 1967 and has led student bands there that have turned out dozens of high-profile musicians, including John Scofield, Roy Hargrove, Terri Lynne Carrington, Dino Govoni, John La Barbera and Tiger Okoshi, to name just a few. With his Pan American All-Stars he stays true to the tradition of Antonio Carlos Jobim’s music while making it very much his own.