American composer Frank Gulino (b. 1987) is among the most in-demand writers of chamber music and recital literature for brass instruments. Frank’s works have been commissioned, performed, and recorded by some of the world’s foremost brass musicians, including euphonium virtuoso Steven Mead, the Israel Tuba Duo, and members of the Atlanta, Baltimore, Boston, Chicago, Cincinnati, Dallas, Iceland, Milwaukee, National, Philadelphia, Pittsburgh, St. Louis, and Vancouver symphony orchestras, the Metropolitan Opera Orchestra, and all four DC-based premier military bands. With a broadly appealing compositional voice that has led to performances across the United States as well as at venues in Argentina, Canada, Estonia, Italy, Latvia, Mexico, Panama, Portugal, Singapore, South Korea, Spain, Taiwan, the United Kingdom, and Uruguay, Frank’s music remains exceedingly popular with performers and audiences alike. Frank is a member of the American Society of Composers, Authors and Publishers (ASCAP) and is a multiple winner of the ASCAP Plus Award in the Concert Music category.

As a trombonist, Frank has appeared at Carnegie Hall, the Music Center at Strathmore, the American Trombone Workshop, and the Joseph Meyerhoff Symphony Hall, home of the Baltimore Symphony Orchestra. He has also served on the faculties of the DC Trombone Workshop, Shepherd Trombone Workshop, Mid-Atlantic Trombone Alliance, and ITF Composers Workshop. Frank holds a BM in Bass Trombone Performance from The Peabody Conservatory of Johns Hopkins University, where he studied with Randy Campora, Jim Olin, and David Fedderly, all of the Baltimore Symphony Orchestra. He has also studied with Vincent Belford of the New Jersey Symphony Orchestra and jazz artist Bob Ferrel. Frank is an artist/clinician for the Edwards Instrument Company and performs on Edwards trombones and Griego mouthpieces.

“Playing Edwards trombones has benefited me tremendously as both a performer and a composer. Not only does my Edwards provide me with the finest playing experience available, but the outstanding flexibility and other characteristics of the horn continue to inform my writing for the instrument. I look forward to writing for the trombone for a very long time, due in no small part to Edwards having redefined the musical possibilities for this instrument.” 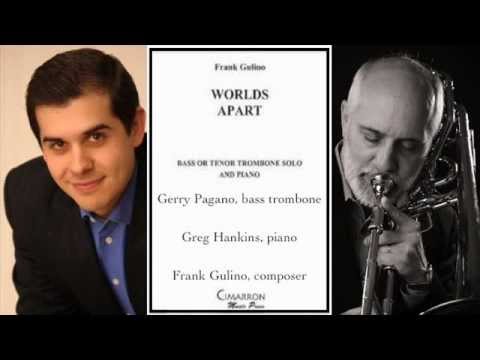 Frank in the News