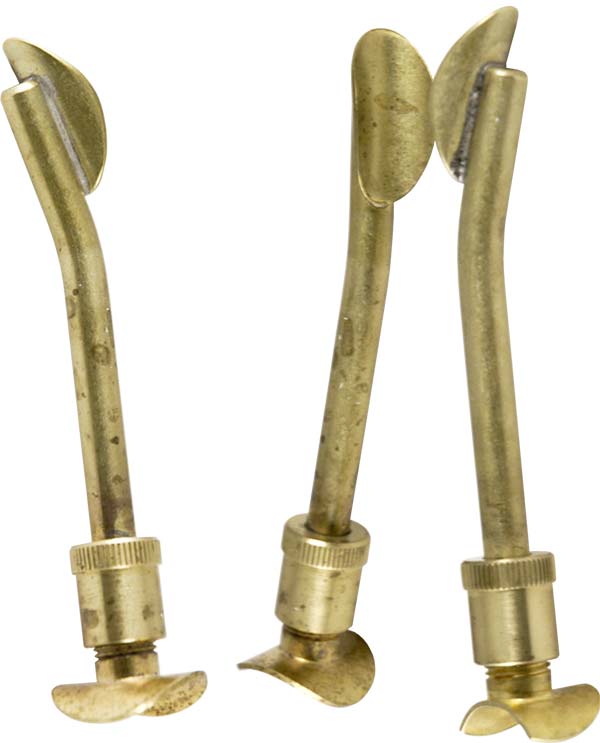 Many Edwards players are quickly converting their sections after trying Edge Braced instruments. Previously purchased Edwards valve sections can be converted to the new system either at our factory or by a local repair technician. To have your horn converted locally, you may purchase a kit from us.

Want an Edwards with faster response, more depth of sound and easier articulations? We did – and this is how we came upon a creation we have named the “Edge”.

The “Edge” bracing was born from an email received in March of 2001 from a professional trombonist in NY. He told of a new bracing that he had mounted to his horn which made it respond faster, offer more depth of sound, and made it the best Edwards he had EVER played. During this period another pro visited the factory and we were able to do some further research and development on our bracing.

Starting with a standard valve section all the bracing was removed. From this point, the experimenting began with brace placement. It was interesting to find that when certain braces were added, the sound would widen but articulations would become more difficult. Trying to find the right balance of width of sound with ease of playing became the goal of the experiments. Once a prototype was established we realized that the bracing really helped the ease of articulation and had all of the other qualities we sought after. We named this new bracing system the “Edge” brace. With this new “Edge” bracing the valve tab that connects the valve section to the bell is removed. This allows the bell to resonate independently from the F tubing and thus improving the response.

Several tenor valve sections were converted to the “Edge” system. Over the next few months, approximately 80% of customers purchased the “Edge” braced trombones. This horn with the new system does reach the redline (fortissimo) volumes sooner. Because of this that Edwards will continue to offer the traditional style bracing.

Our first two basses were built with “Edge” bracing right before the 2001 Alessi Seminar. They were well received by the bass players at the seminar. The first dependent bass with edge bracing was built in December 2001 and it is incredible. The dependent and independent edge braced basses will be available to try at all of the upcoming shows so drop by and play all of the new valve sections.

Installing in this manner is the most simple procedure. The Edge Brace will be soldered into place and the valve tab removed without removing the lacquer from the entire valve section. There will be some slight discoloration to the existing lacquer upon completion.

Installing in this manner is the most simple procedure. The Edge Braces will be soldered into place and the valve tabs removed without removing the lacquer from the entire valve section. There will be some slight discoloration to the existing lacquer upon completion.

Contact us to receive an RMA number and make arrangements to send your valve section to the factory. If there is a professional repairman in your area, you may order the conversion kit by calling us at (800) 562-6838.