Brian Wendel joined the Vancouver Symphony Orchestra as Principal Trombone in 2017. Winner of the Alessi Seminar Asia Competition (2018) and two International Trombone Association competitions (2014 and 2016), Brian has performed with the Philadelphia Orchestra, the New York Philharmonic, and the New York Philharmonic Brass Ensemble, and has appeared as a soloist with the Juilliard Trombone Choir. He has worked with conductors Yannick Nézet-Séguin, Valery Gergiev, Bramwell Tovey, Esa-Pekka Salonen, David Robertson, Alan Gilbert, Jaap Van Zweden, and Charles Dutoit, among others, performing and recording in venues around the world. Brian received his bachelor’s degree from The Juilliard School, where he was a scholarship student of Joseph Alessi.

In the realm of chamber music, performances have taken him to venues including the United Nations, the Russian Embassy in Washington, DC, Madison Square Garden, and Rogers Arena. He enjoys performing with the VSO Brass Quintet and engaging with audiences through a more intimate setting. As a student, Brian spent summer months as an orchestral fellow at the Music Academy of the West; Pacific Music Festival; American Institute for Musical Studies in Graz, Austria; the National Orchestral Institute; and the Alessi Seminar, and was an inaugural member of the 2013 National Youth Orchestra of the USA.

Brian is passionate about working with students of all ages and backgrounds. Since joining the VSO, he has enjoyed teaching at VSO’s orchestral training program, Orchestral Institute, as well as through VSO Connects, an outreach program for high schoolers in British Columbia. 2018 also marked the formation of Vancouver Trombone Week, a seminar on trombone performance and education, co-founded by Brian and VSO bass trombonist, Ilan Morgenstern. In addition, Brian has worked with students at the Alessi Seminar Asia in 2018 and is returning in 2019 as Associate Instructor for the Seminar, taking place in Shanghai.

Starting on the piano at age six and the trombone at age nine, Brian studied both classical and jazz music from an early age. Growing up in the rural town of Conway, Massachusetts, he was a student at the New England Conservatory Preparatory School in high school. Some of Brian’s early musical mentors include David Sporny, Norman Bolter, Andy Jaffe, and his dad, Renato Wendel. Outside of music, Brian loves to travel whenever and wherever he can and has been enjoying the sensational nature of British Columbia.

“I’ve always loved the quality of sound of Edwards Instruments: smooth like velvet, great core, and a broad resonance in all registers. I believe it is the highest quality horn on the market!” 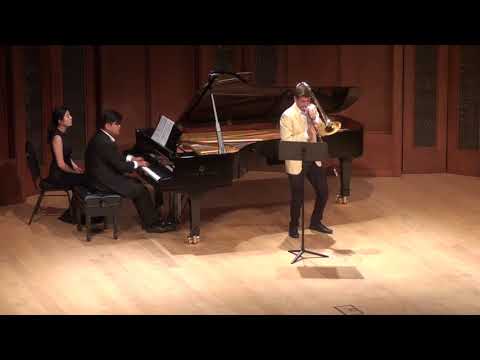